Warm up on a chilly night by making Instant Pot French Onion Soup! This take on the classic comforting soup is made in the electric pressure cooker and finishes in the oven. First, caramelize the onions. Next, add wine, beef broth, thyme, salt and pepper, and let simmer. Then ladle the soup into crocks, top with crusty bread and gruyere cheese and broil to perfection. Hearty and comforting, this Instant Pot French Onion Soup is hard to beat. 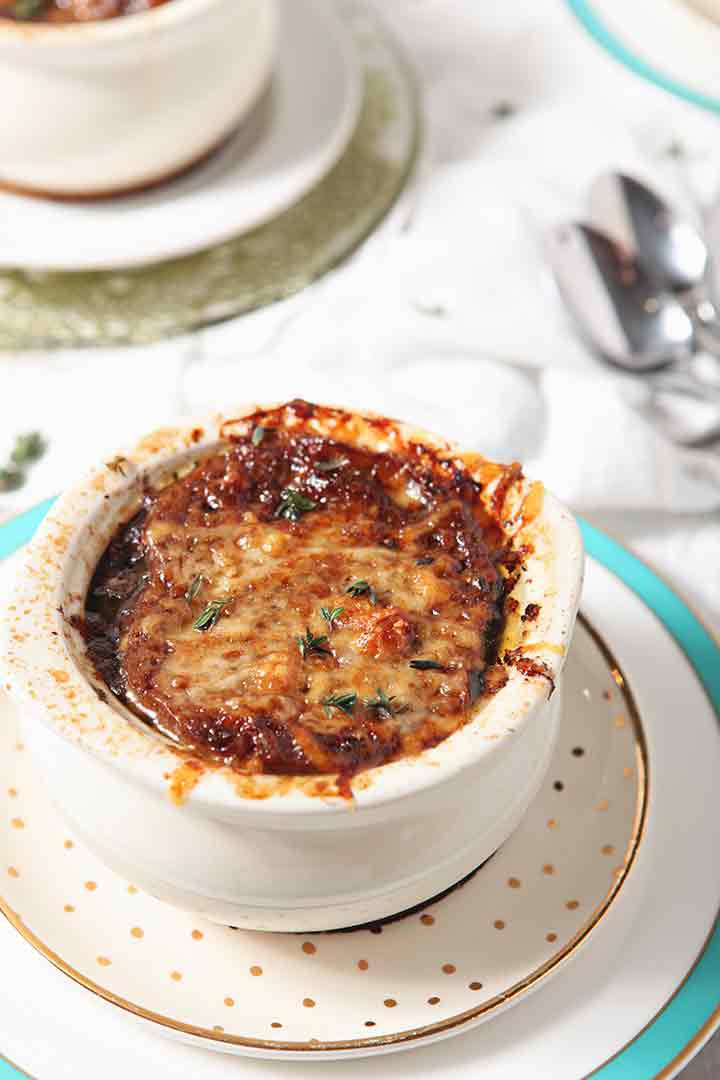 You could call me the queen of all things French Onion.

Whether it’s the traditional soup, bruschetta, risotto, poutine, biscuits and more, I’m all about the French Onion flavors.

Why should it be no surprise that I’d make you French Onion Soup in the Instant Pot? 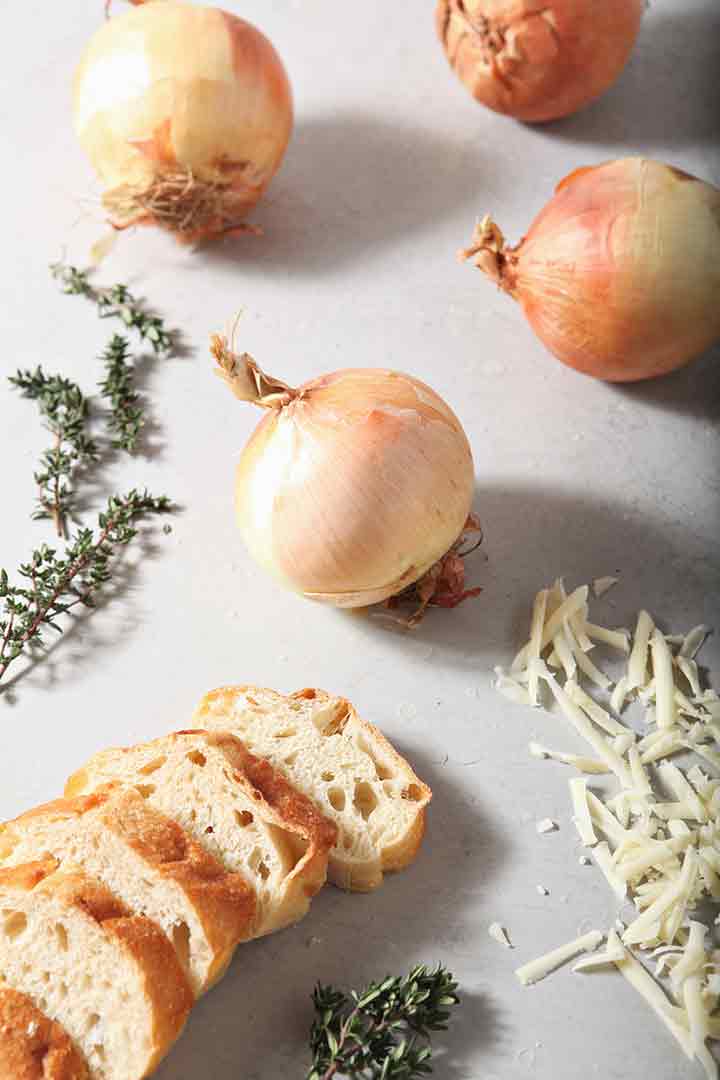 This recipe has been a long time coming because I discovered that I could caramelize onions in the IP while testing a recipe for French Onion Meatloaf. (Spoiler alert: It’s insanely delicious and has a cheesy, onion-y gravy. If you’re a French Onion fan, you definitely wanna try it!)

Why not just make the entire soup in the Instant Pot instead of messing with a pot on the stovetop?

That became my goal this winter, and I accomplished it with a flourish, if I do say so myself. 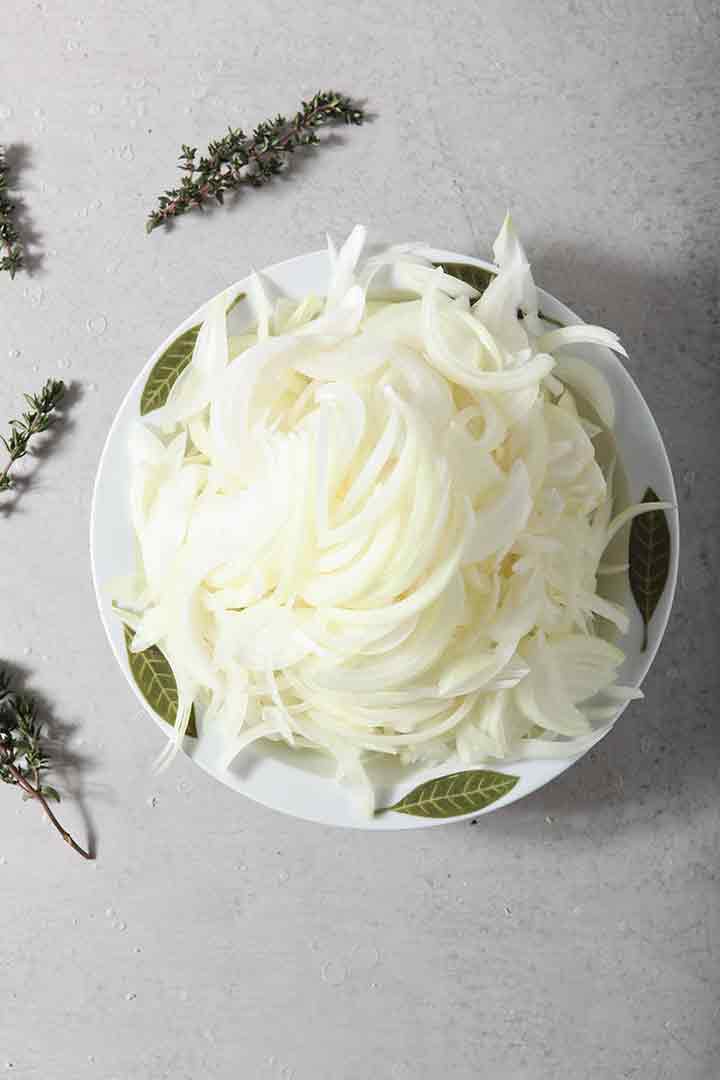 I know you’re wondering: Why make French Onion Soup in the Instant Pot?

My question back is, “Why not make French Onion Soup in the Instant Pot?”

If you don’t have a stovetop, but want to make French Onion Soup, this is an easy way to make this happen.

If you don’t want to babysit a pot on the stovetop, the Instant Pot is a great tool to have on hand!

While we don’t use the pressure setting for the French Onion Soup, the onions can easily be caramelized in the Instant Pot. As an added bonus, the pot doesn’t get nearly as hot as a pot on the stovetop might, and I’ve found that if you watch your onions, they won’t scald in the bottom. That’s a win!

At the end of this recipe, I suggest pouring the soup into oven-safe bowls, topping with bread and cheese, and broiling for a few minutes. If you don’t have an oven or don’t want to do this step, you don’t have to! Add a piece of toast, sprinkle some cheese on it if you wish and enjoy as is without the oven step. 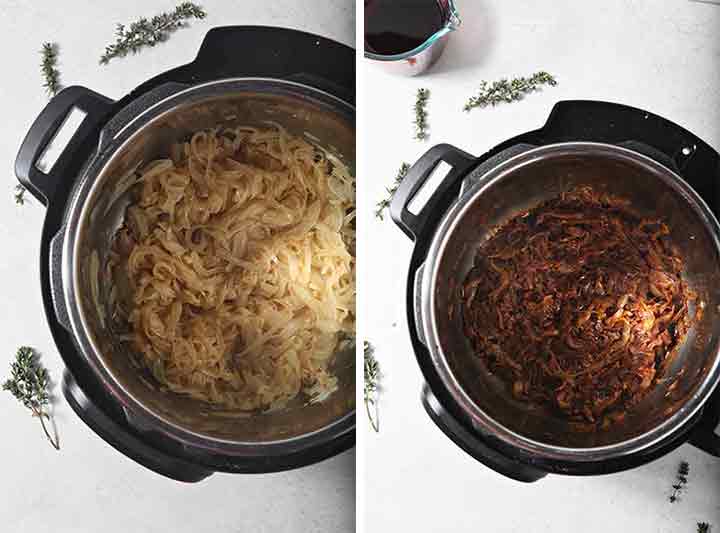 What are the best onions to use in French Onion Soup?

Personally, I prefer yellow onions. While they’re not as sweet as a Vidalia onion, when they caramelize, they become a lot sweeter without becoming too sweet.

You can obviously use a sweet onion if you like your onions to be on the sweeter, mellower end.

I’ve never made French Onion Soup with red onions, but think they would provide a deeper flavor and less sweetness than a yellow or Vidalia onion. 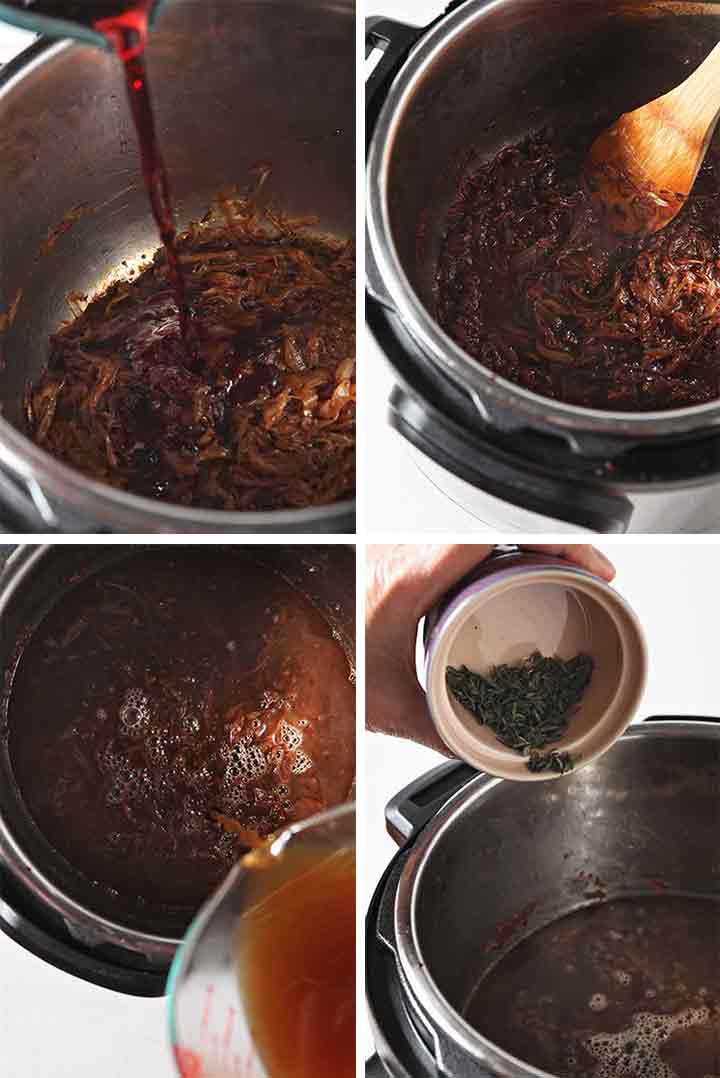 What is the traditional cheese used in French Onion Soup?

Gruyere cheese is the traditional cheese in French Onion Soup.

That said, I’ve used provolone and Swiss cheeses in a pinch, and they both work nicely with this recipe, too! 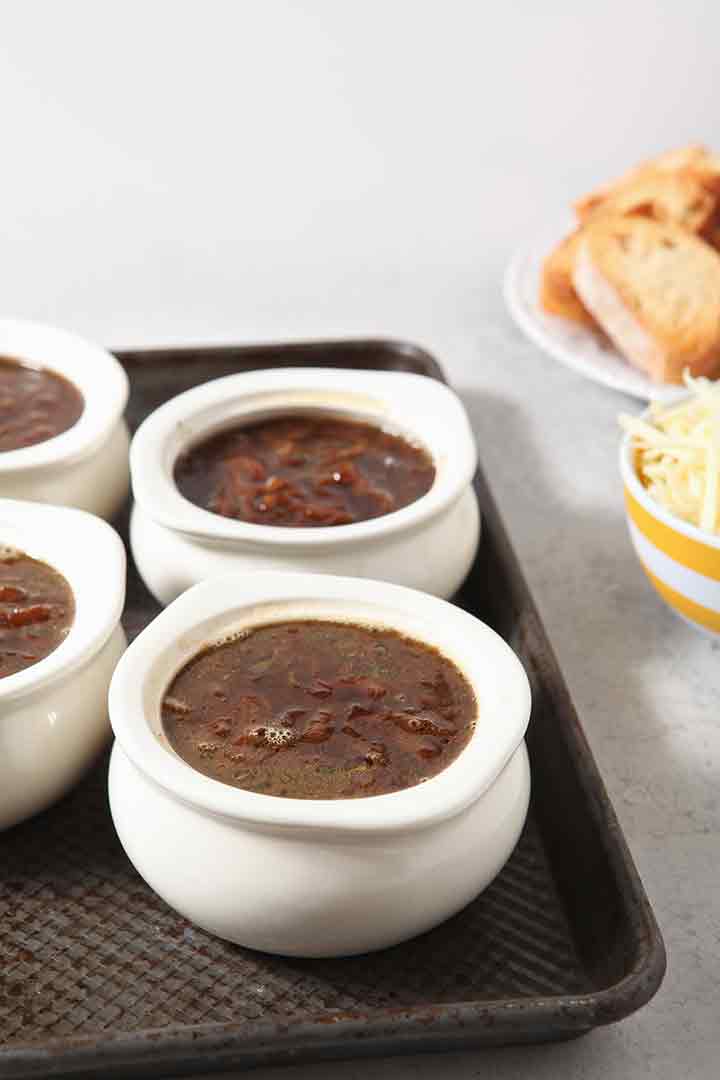 I don’t drink alcohol and don’t want to add red wine to my soup. Can I still make this recipe?

I use the red wine to deglaze the Instant Pot, as well as add some depth in the flavor. That said, you can definitely make this recipe without it.

If you choose to forgo the red wine, I suggest using a cup of beef bone broth to give some extra flavor to the soup before adding in the broth. This will provide some extra depth of flavor that the wine provides without adding the wine.

If you don’t want to go that route, just use an additional cup of beef broth to deglaze before adding in the rest of the broth and call it a day. 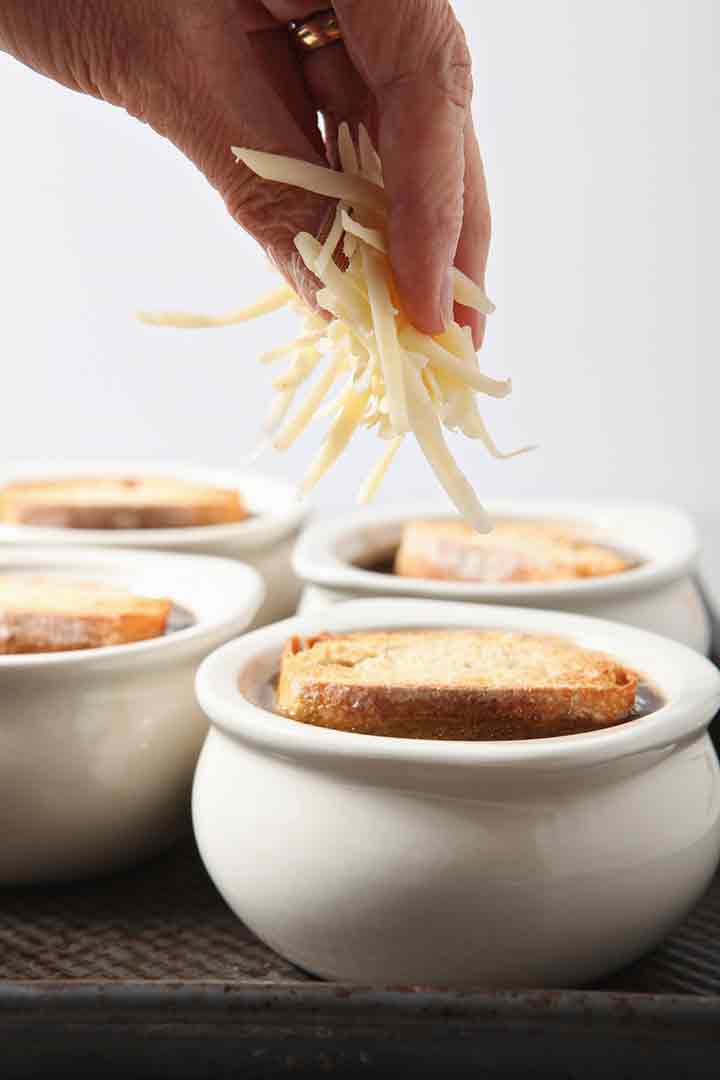 How do you caramelize onions in the electric pressure cooker?

Assuming your pressure cooker has a Sauté setting like my Instant Pot does, you can easily caramelize the onions in it.

As the pressure cooker heats, add the butter. Once that’s melted, add the onions. Stir them constantly as they cook down, until they’re nice and browned! (In total, it will take 30-45 minutes for the onions to be nicely caramelized.) 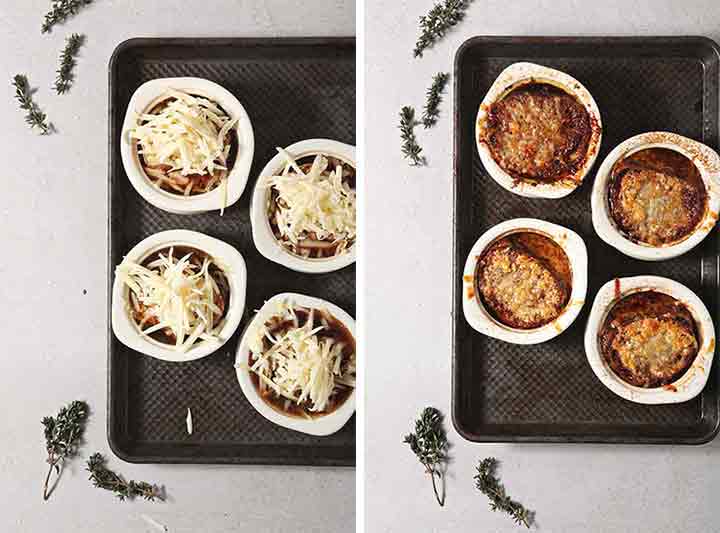 What are sides I could serve along with this Instant Pot soup? 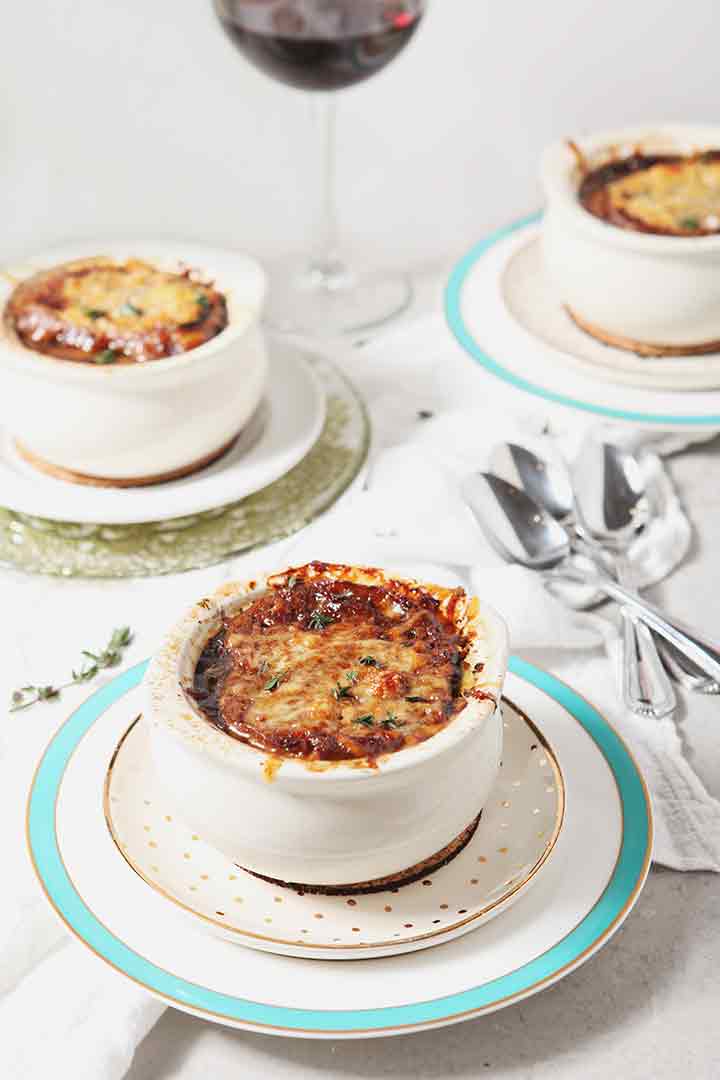 Now who’s ready to make some of this soup?

Scroll on down to learn how easy it is! 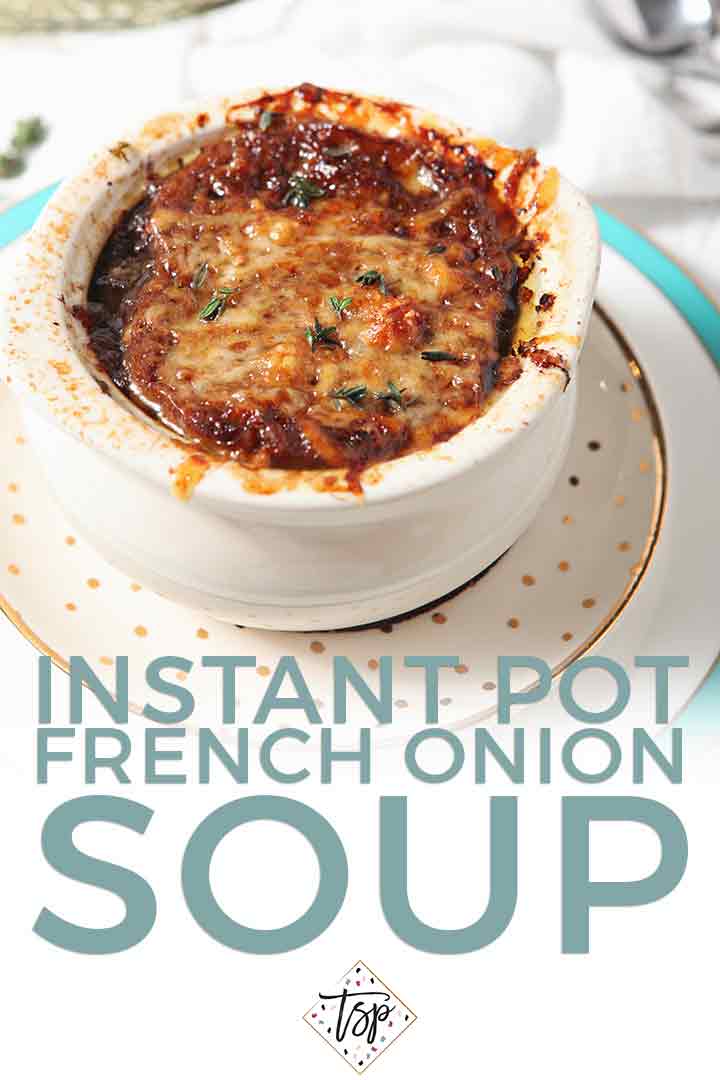 Warm up on a chilly night by making Instant Pot French Onion Soup! This take on the classic comforting soup is made in the electric pressure cooker and finishes in the oven. First, caramelize the onions. Next, add wine, beef broth, thyme, salt and pepper, and let simmer. Then ladle the soup into crocks, top with crusty bread and gruyere cheese and broil to perfection. Hearty and comforting, this Instant Pot French Onion Soup is hard to beat.

Make the Soup in the Instant Pot

Finish the Soup in the Oven

As an Amazon Associate and member of other affiliate programs, I earn from qualifying purchases.

I’m Erin. In my kitchen, we celebrate fresh ingredients, simple entertaining and making twists on classics. C’mon… let’s take your love of cooking to a new level.

we won't send you spam. unsubscribe at any time. 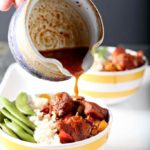 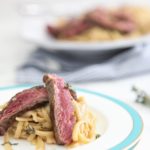 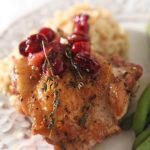 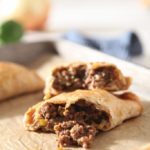 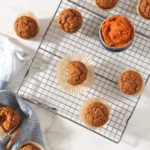 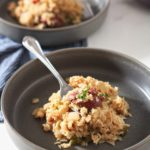 subscribe via email to get the latest entertaining recipes and tips sent straight to your inbox.

we won't send you spam. unsubscribe at any time.